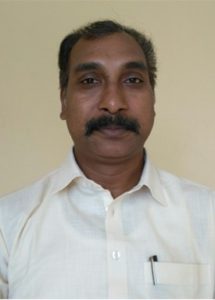 As an artist, I draw my energy from my specific locale. I get inspired from the spectrum of social ambience, flora and fauna, local philosophy, rustic wisdom, cuisine, social criticism bordering on a strident sarcasm. Kerala’s regionalism, dialects, extinct species, geographical peculiarities, profound anxieties and deep sighs, all these determine the trajectory of my work. A complex linear interplay of this phantasmagoria provide the ideal sounding board for my art to take off in its projection and journey towards globalization. Voyeurism is the leitmotif here, as I visualize the images through multiple angles that constitute the very essence of my visual academics.

After my sojourn at Bangalore, l currently practice art in a rural hamlet of northern Kerala. All tensions and dissonances characteristic of the city find their resonance in rural spaces as well through mute wars and a suppressed violence.

To be frank and humble I am aware of the crass hypocrisy of the modern individual or subject with all its attendant paraphernalia has been the leitmotif of my creative process. Towards realising this, I have resorted to the universal decorative motifs to give a shape and credo to this ‘self-deception’ which is pervasive in its reach and whose cumulative effect does impact our socio-political structures in a big way. The contemporary mainstream is subjected to a consistent interrogation towards constructing new paradigms in order to produce alternative, parallel discourses.

Born in a rural hamlet of Kerala, the southern most Indian state, I have been pursuing art professionally for the past 18 years. Over these years, I have been trying to fine-tune my modes of expression through experience, observation and execution. The landscapesof the mind with its essential reflections of the outside world have carved out a new idiom in the totality of my artistic oeuvre, throwing up fresh challenges and avenues to explore their alternatives vis-a-vis modernity. The pursuit of the global subject from the local platform has been a defining characteristic trait of my professional profile which involves continuous dialogue between the contesting spaces of the past and the present; the interface of which has invariably lent refreshingly new and quality perspectives to my art.

My staple objective has always been to expand the boundaries of expression, in the process to explore new heights of the medium, thereby setting new standards in terms of form and content. This endeavour is at once a challenge and an opportunity as it throws up quite a few possibilities for the artist to embrace or repudiate, whose omissions and commissions leave a profound impact on her/his trajectory. The plethora of images culled from both the print and the visual media lend themselves in an incessant fashion toward the manipulation of frames which go a long way in a symbiotic fusion of the inner and outer domains of my creative journey.

Throughout my artistic odyssey, I have tried to explore the nuances of voyeurism and narcissism. I have always endeavoured to see through the motifs which in my view have lent an X-ray effect to my work. The space configuration is made complex for the sake of visual effect enhancement. The surrealist imagery in my work can be traced back to their roots in the Indian and Oriental mythologies. I have attempted to juxtapose it with a parallel movement through the explosion of images which is a characteristic trait of modern times. In fact they render my work a unique dimension supplementing each other.

The result is a new visual idiom which is at once local and global. I am tempted to say such an idiom makes my work both traditional and contemporary. The past finds its echoes in the present whilst the present is amplified and reinforced by the past. They are no longer dichotomies that cancel each other, instead coexist in a mutually complementing fashion thereby deconstructing the conventional binaries.